The Effect of Independent Auditor's Report on User's Decision Making

On the basis of "Property Right" Theory, a company is considered as a small group of written or unwritten, formal or informal agreements between beneficiaries and their links: and it is supposed that each person follows his interests and a conflict of interest exists among them. The information inserted in financial report is used in the process of drafting contracts between persons and company. For loan contracts by using ratios, such as the ratio of debt to owners' equity limitations are imposed on managers in transferring wealth from loaners to shareholders. Using accounting income in bonus schemes in order to decrease the conflict of interest between shareholders and management, and in order to prevent managers from leaving is amongst management responsibilities. Finally, using accounting information in political processes such as tax determination, pricing of goods and services, economic decision makings, etc. are samples of accounting information used by loaners, owners and governments. Wealth of persons is also affected by the accounting information prepared by managers. In spite of conflict of interest and effect of accounting information on wealth of mentioned beneficiaries, it is necessary to choose independent auditors for monitoring and attesting this information.
Independent auditors, who are chosen in shareholders general meetings, impartially make a professional comment, by auditing vouchers, documents and evidences supporting financial statements. Independent auditors report accredit accounting information which from the basis of decision makings of beneficiaries.
Researches, done in other countries, show that projected cases  in independent auditors reports and specially the explanatory paragraph or paragraphs inserted, are used for company's general meeting decision making in order to decide on adjustments, profit division, managers bonus, etc. Furthermore, mentioned accounting reports are used by government, politicians, stock exchange, credit institutions and banks for different decision makings.
The purpose of  this  research  is  to find  the answer  to  the question: "What is the lack of auditors reports effect on company's general meetings decision making and governmental organizations, like ministry  of  economic  and finance, stock exchange and banks caused by?" In order to find the answer to the above question, the research is compiled in the form of seven research hypotheses.
In this research, 46 companies accepted in stock exchange in the period of years 1994 to 1996, are studied and variables extracted from documented evidence are subjected to the research hypotheses.
Conclusion of the research shows that in spite of presence of major shareholders and increasing of share percentage, substantive separation of ownership from management has not been achieved. The lack of substantive separation of ownership from management, lack or weakness of conflict of interest between owner and/or manager and closeness  (direct access)  of  owner to financial information and in some cases support and restrictions of business law have effect on how independent auditor's reports are used in company general meeting decision making. Lack of related laws and provisions cause the manner in which independent auditors report effect decision making of governmental institutions and banks.
Finally, the researcher, on the basis of performed studies and conclusions of this research, has made suggestions on this topic and recommended subjects for future researches. 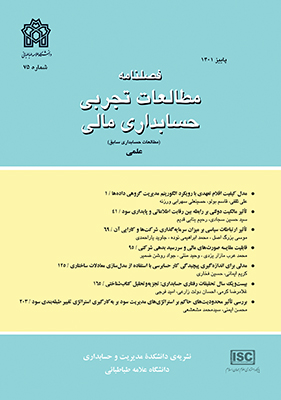